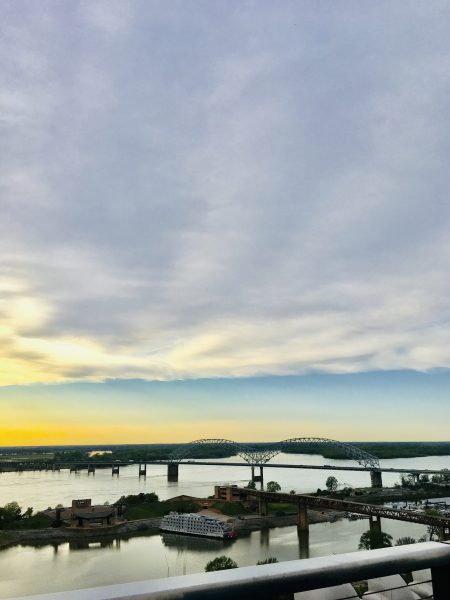 My journey to living and working in Downtown Memphis is an interesting one. Before I even brought up the idea of moving from our home in Mississippi, I was very intentional about exposing my husband and children to all that the area had to offer.

First, I started with my husband Chris. I began suggesting that when we needed to stay in the Memphis market on business, we should stay in one of the hotels Downtown. After I got him familiar with the area, we began adding our children into the mix. We would venture down here on Saturdays with our children to attend art classes at Memphis College of Art, grab lunch at one of the local spots and get our bikes fixed at Peddler Bike Shop. So, by the time I was ready to present the idea of making Downtown Memphis our home, my family was already comfortable because they had experienced it many times. In 2009, we packed up our belongings and headed towards the Mighty Muddy, settling on the corner of Madison Avenue and Second Street.

The 38103 zip code has changed quite a bit since we moved here a decade ago. When we first arrived, we thought we had made a mistake by taking a right rather than a left to go to dinner, not realizing that Main Street north of Madison Avenue closed up at 5 p.m. Fast forward to today, 10 years later, it’s absolutely amazing to take in the sights and sounds you see and hear after 5 p.m. north and south of Madison Avenue as well as east and west. The days of having to choose which direction to turn to find a restaurant, a place to congregate or to socialize with neighbors are gone. There is no longer a mass exodus of the city’s center at quitting time. There are reasons to linger and that is really exciting to me. As a result, it’s no longer a burden to walk 15 minutes north or 15 minutes south to get to a destination because of all there is to see along the way. Speaking of destinations, I would be doing an injustice if I failed to mention South Main, an area that has seen tremendous growth as of late. Whether it’s The Chisca on Main, Halloran Center, Powerhouse Cinema Grill, apartments and restaurants – there is truly something for everyone.

Having now moved closer to the river, we have a bird’s eye view of events such as the annual Rajun Cajun Crawfish Festival benefiting Porter-Leath. Over the years, our family has seen the crowd grow substantially. At the start, it was just held on Wagner Place. Now, it takes up Wagner Place and Riverside Drive. During this year’s festival, I bet there wasn’t a blade of grass that wasn’t covered in a blanket with families enjoying the music. It was a beautiful sight! I know the artists and volunteers for RiverArtsFestival thought some of the same things as they watched the sunset from Riverside Drive last year. A few of the artists even told me how much they enjoyed being down on the river.

With all the remarkable changes that I’ve seen occur in Downtown Memphis in the last 10 years, I cannot imagine, especially with the momentum it has gained now, what changes we’re going to see in the next 10 years or the next century. Year 200 is just the beginning.